Bodystance is a New Zealand company taking proven New Zealand musculoskeletal products and concepts to places in the world that need them. 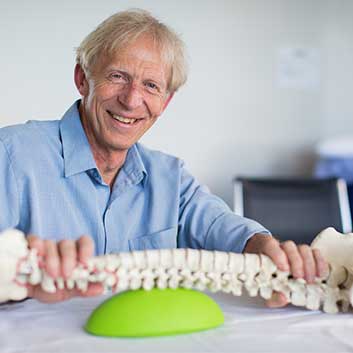 It all started from a chance discussion in 2010 between Dunedin manual physiotherapist Steve August and Otago University Design School head Nick Laird.  Steve was worrying about the upcoming generation of computer-savvy but already hunched adolescents.  Nick insisted he talk to Andrew Wallace, lecturer in Industrial Design with 25 years of experience and several international design awards to his credit.

The rest is history - and much hard work!  New Zealand manual physiotherapy and Steve’s 35 years of expertise in treating spinal problems provide the clinical basis for the Backpod’s home program and its use in specific conditions.

The Backpod itself was designed by Andrew to Steve’s requirements for a truly effective, science-based stretching device - but has far exceeded them.  Andrew’s total design with its polycarbonate core (same material used in jet windscreens) and surgical rubber cushioning outer is unique.  We genuinely don’t think there is anything else that gives such an effective stretch to tightened, hunched spines, or to the tight rib joints which are part of that problem and others.

The Backpod is manufactured in Christchurch, New Zealand.  It was first released in 2012 and is now sold in most countries in the world.  In 2015, Bodystance Limited (New Zealand) joined with German partners as Bodystance GmbH for sales of Bodystance products across Europe and the UK.  In late 2017 the Backpod was placed on Amazon and sales have been parabolic.

The Backpod has won numerous international business, innovation and design awards, including a German Red Dot award in 2013.  In 2015 it won one of the invitation-only German Design Council awards - the only product in New Zealand’s history to have done so.